​The Story Behind The Everybody Club 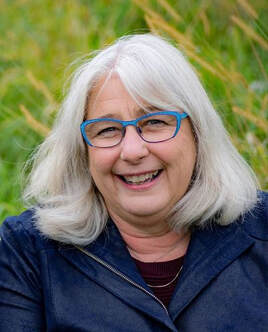 ​When my daughter, Carissa, was young, she started a club with her brothers, dolls, stuffed animals, and even a real friend or two. She named it the Everybody Club. I think she was inspired by Girl Scouts, because the badges she made for each member of the group looked a little bit like Girl Scout badges. She loved being the leader of the group. One of my favorite memories of my daughter is her little-girl self carefully pinning the badges on all the club members and arranging everyone in a circle.

Carissa died in a car accident when she was 16, long after the days of the Everybody Club. I spent the next few years in a daze, filled with grief. When I finally went through some of her things, I found the badges and popsicle stick pennants she had made. I remembered her concept of including everybody in the club, and I thought maybe there was a message in all of this. The Everybody Club seemed like a great theme for a children’s book. 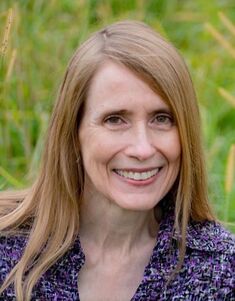 When Linda told me about Carissa’s club, I was immediately interested in making a book about it. I thought “the Everybody Club” was catchy and fun, and I loved the simplicity and power of its message. And what a beautiful way for Linda to celebrate her daughter's life! I wanted to be a part of it.

​Our progress was slow at first. Linda and I were both experiencing a number of challenges in our lives at that time, so we could work on the book only ​intermittently. But little by little, the project inched forward.

Initially I planned to write The Everybody Club as a traditional story, with characters, conflict, and resolution. I wrote several drafts, but something was missing. Then I had an insight that allowed me to think in a different way about the manuscript. In 2015 I worked on a series called Go Go Global for Capstone Publishing. The books featured vivid photographs of people, homes, clothing, and food from around the world. I was asked to write short, rhyming text at a low reading level. The text had a loose connection to the photographs, but the emphasis was on voice. Those books were so much fun to write, and I thought I’d give that concept a try with The Everybody Club. Linda was on board.

And that’s how The Everybody Club got its spark. We decided the story would be simple, told in the illustrations. And the words—Carissa's voice—​would be a celebration from beginning to end. We wanted to lift readers' spirits and help us all see the good in one another. 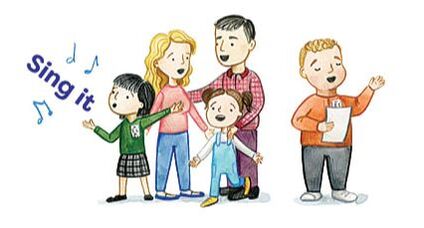 Because this project was so near to her heart, Linda wanted to have a say in how the book would look. That meant we would need to self-publish it—an adventure in itself!

​By this time it was late in 2018. We found our illustrator, Yana Zybina, on fiverr.com, a platform for freelancers around the world to sell their services. We both liked Yana’s portfolio. Yana is from Russia, so English is not her native language, but her sincere bio on fiverr made us think she might be just the right person to illustrate our book: "If you need unique and tender illustration, I will do my best."

"I will do my best."  That phrase captured our approach to making this book. We were trying something we'd never done before, and we had a lot to learn, but we would do our best.
The first step was to develop the Carissa character.


Then the sketching began in earnest.​ 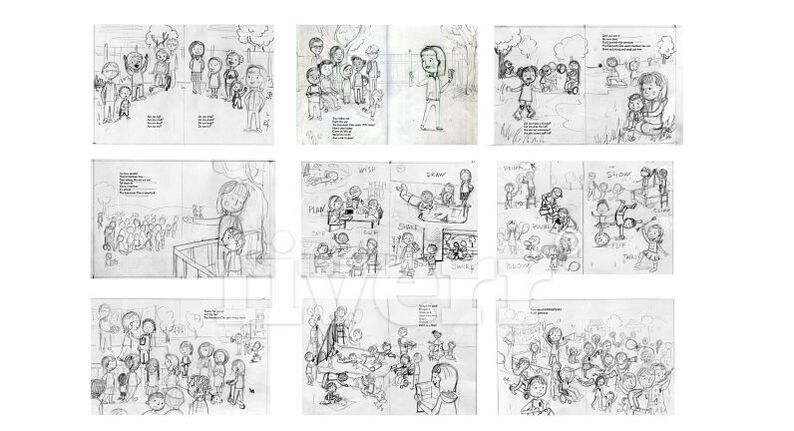 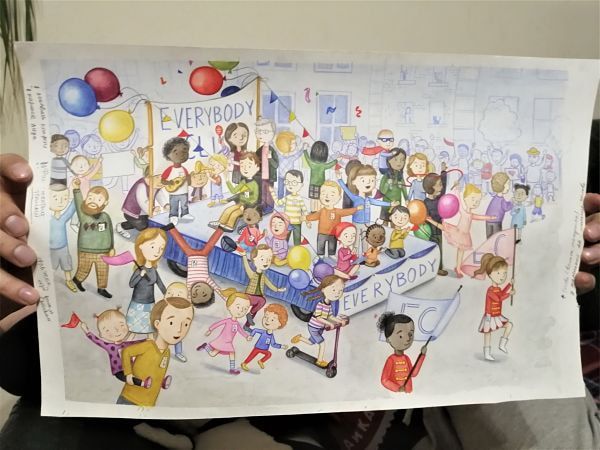 ​We were continually amazed by how many DECISIONS are involved in creating a picture book. The decision-making was nonstop, from big things (trim size, cover image, font) to small (moving text or images "just a tad" this way or that). And keeping track of everything was a challenge. At one point I had more than 700 files in 60 folders. 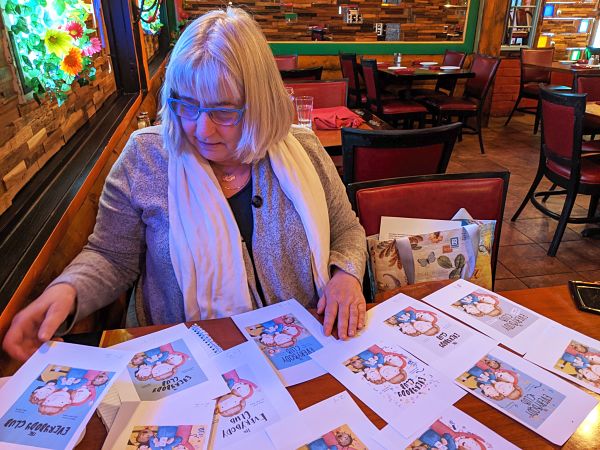 Here's Linda looking at some cover options. And these weren't all of them!
​(At Luna di Luna in Bloomington in February 2020, about a month before the Covid-19 shutdowns.) 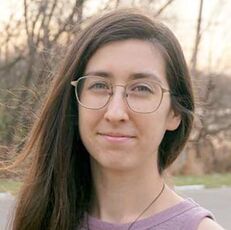 In the summer of 2020, we asked local artist Heather Homa to design The Everybody Club. Heather offered creative solutions to our design challenges and added a distinctive touch to the project, particularly to the end pages. With the same "I will do my best" attitude as Yana, Heather was just the right person for the job.

Because we were cautious about investing a lot of money in inventory, we decided to go with print-on-demand at both IngramSpark and Amazon. Now it was time to upload files and order proofs. The proof stage was probably the most nerve-wracking part of the whole self-publishing process. Tracking down answers to our questions seemed like an impossible task. But even though we still had some technical glitches to work out, in December 2020 we were holding actual copies of The Everybody Club in our hands. And in March 2021 we launched the book. 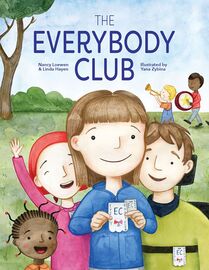 Then came a major twist in the road. Almost as soon as the book came out, we realized that the cover was all wrong. The white characters were more prominent than the characters of color. This was definitely not the message we wanted The Everybody Club to convey.

Our hearts sank. The book wasn't finished, after all. We had to replace the cover.

I describe this experience in detail in a blog post called A New Cover for The Everybody Club. Replacing the cover was much more complicated than we expected, but there was no going back. We had made a mistake and we needed to fix it. The only apology is doing the work.

Linda and I sometimes found ourselves taking heart from these lines near the beginning of the book:

Did you make a mistake?
Did you drop the ball?
Are you sad sometimes?
Are you scared you'll fall?
Then don't you worry! No harm done.
That's just life—​for everyone.
The Everybody Club NEEDS members like you:
Brave and strong and tough and true.


At last, in November 2021, we finished the long journey of creating The Everybody Club.

Now begins the journey of sharing the book—and Carissa's message—with others.

We hope you'll join us!