BEHIND THE BOOK: BABY WANTS MAMA
​ 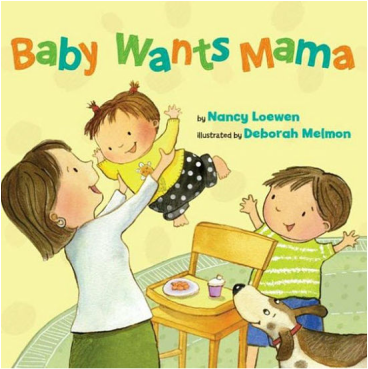 This piece appeared in the Just Launched column of Children's Literature Network (CLN) in 2013. ​

And once in a while, those darnedest things turn into books!

That’s the case with Baby Wants Mama. Years ago, when my son was a talkative, tow-headed four-year-old, he quite literally handed me the first two lines of this book. His younger sister had said something cute, and I was laughing. I guess Louis wanted to one-up her, because all of a sudden he just planted himself in front of me and blurted out, “Baby wants Mama. Cat wants fish!”  He checked to see that I was laughing (I was) and then he ran off.

Those lines were a real head-scratcher. And yet there was something about them…a  jazzy rhythm…a hint of a story. I jotted them down in my idea file.

That part—the inspiration for the story—I remember clearly. I know exactly where we were standing in the kitchen. I can see the eager, upward tilt of Louis’s face as he said those lines. But the rest of the manuscript’s history is a blur. I don’t remember when I wrote the first draft. All I know is that in my files are a few rejection letters from the year 2000—along with a cringe-inducing manuscript I don’t even recognize. Scrawled across it in red ink, in writing that’s definitely mine, is a great big “UGH!”

But I didn’t give up on it. In the spring of 2002, while at Hamline working toward my MFA, I took a class in picture book writing. That must have been when I wrote the next draft. According to the dates on my computer files, I also made revisions in December 2008 and December 2009.

A year and a half went by.  Now we were into 2011. That was the year I published The LAST Day of Kindergarten with Marshall Cavendish (now Amazon Children’s Publishing). My editor, Robin Benjamin, was interested in seeing more of my work. By that time Baby Wants Mama was among my favorite manuscripts. I dusted it off, sent it in, and made a few more revisions based on Robin’s suggestions.   A few weeks later I had a contract.

The basic idea of Baby Wants Mama was to portray the ever-shifting wants and needs of a busy family. Initially, the story was told by a first-person narrator—a child who observes the various activities and who feels a sense of belonging in the midst of all the chaos.  In the revision process, we decided that we didn’t need a first-person narrator; the reader could just observe the family directly. And the activities of the book were narrowed down to that crazy hour right before dinner, when everyone (including the pets) wants something—but what everyone wants most is to sit down together and eat.

Baby Wants Mama is a first for me in three ways: It rhymes. It’s extremely short (just 75 words, and some of those are repeated many times). And it’s for the youngest of readers.  I like to imagine parents reading it to babies on their laps…and preschoolers or kindergartners sounding out the words by themselves.

Picture books are never just about the words, though. This little manuscript was W-I-D-E open to an artist’s interpretation.  The story called for illustrations that were bright, cheerful—and, my particular wish, a little quirky.  Yes, those are vague words that could apply to just about any children’s illustrator out there. But I got lucky: Deborah Melmon was the perfect choice, and I think she did a wonderful job of capturing—and expanding upon— the spirit of this book. Relaxed yet playful, her work just plain makes me feel good. And that’s been the response of others who have seen the book, too. People read it and smile.

Now, to get back to my son. If you’ve kept up with the math, you’ve realized that the talkative, tow-headed boy who inspired Baby Wants Mama isn’t a little kid anymore. A month after the release of this book, we’ll have another milestone in the family: Louis will be graduating from high school.

Luckily for me, he’s said lots of darnedest things over the years. There’s plenty more in my idea files. I’d better get busy. 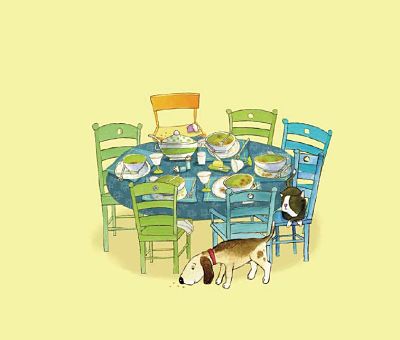